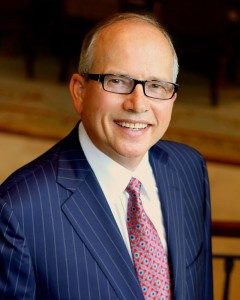 “Building a Brand”
Stan Clark, a native of Tulsa, Oklahoma, graduated from Oklahoma State University in May of 1975 with a BS degree in Business Administration.
Clark had a mere $1200 to his name when childhood friend Steve File suggested he might open a bar. Clark eagerly chimed in, “I’ll go in partners with ya!” and the two opened Eskimo Joe’s on July 21, 1975. Clark was 22 years old at the time. From the most humble beginnings, Clark has built a restaurant and retail brand that has gained national, even international notoriety.

Clark credits all of his companies’ successes to the people who create the magic every day for their guests. “Our people truly are our business,” he has said for years. “We should create a good feeling with every interaction with every guest, every day!”

One of the company’s legacies is their support of the Stillwater community, particularly the Stillwater Area United Way. They’ve also sponsored or contributed to the Special Olympics of OK, the Stillwater Public Education Foundation, the Coaches vs Cancer program, and various other OSU departments or programs, including the South Entry Plaza of Boone Pickens Stadium. An Eskimo Joe’s scholarship for teachers was established with the OSU College of Education.

Stan is married to Shannon Clark, and is the proud father of three, Maguire, age 14, and twins Gabi and Hudson, 12. Clemons is best known for designing and executing branding campaigns. One was for Bud Light (currently the #1 global brand with revenues totaling $8.4B) and Oklahoma State University’s largest and most successful single campaigns to date – the $300 million NEXT LEVEL Campaign which funded Boone Pickens Stadium and the $60 million LEAVE A LEGACY Campaign endowing all intercollegiate scholarships.

Active in the community, Clemons serves on several boards including Boys&Girls Club, Cristo Rey School, Oklahoma Sports Hall of Fame Board and the Oklahoma Education Workforce Initiative. He owns a publishing company, is a published singer/songwriter and a member of the American Society of Composers, Authors and Publishers.

Clemons earned his Bachelor of Science degree in advertising from Oklahoma State University and has an MBA degree. He has been married to his college sweetheart, Debbie, for 30 years; they have three children.