Exiting the Tunnel: The year behind us, the year ahead – Mayor David Holt

RSVPS are at capacity.  Please join the Wait List. Mayor David Holt took office April 10, 2018, as Oklahoma City’s 36th Mayor. He was elected Feb. 13, 2018, with 78.5 percent of the vote. It was the largest vote percentage achieved by a non-incumbent candidate for Mayor since 1947, and it made Holt the youngest Mayor of Oklahoma City since 1923, the first Native American mayor of Oklahoma City, and at the time of his election, the youngest mayor of a U.S. city with more than 500,000 residents.

Mayor Holt’s “One OKC” message reflects his belief that Oklahoma City can continue to thrive only if we set aside the things that divide us and find common purpose. He applies that philosophy of unity to his four top priorities:

In his second year in office, Mayor Holt recorded his signature achievement, shepherding the development and successful passage of MAPS 4, an ambitious, nearly $1 billion package that will address 16 critical challenges and opportunities. 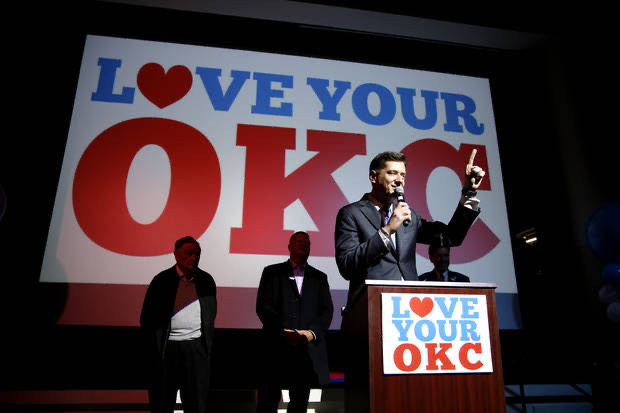 The development process Mayor Holt led for MAPS 4 raised the bar for inclusivity and transparency and culminated in a unanimous Council vote for the package. On December 10, 2019, the voters of Oklahoma City overwhelmingly approved the eight-year, one-cent sales tax to fund MAPS 4 with 72 percent of the vote, the highest percentage of support for any sales tax in modern Oklahoma City history.

The 16 priorities addressed by MAPS 4 include:

For more information about MAPS 4, click here. For a more in-depth look at Mayor Holt’s work in all of his priority areas at City Hall, watch or read his most recent “State of the City” address here.

A month after taking office, Mayor Holt was named one of the “Ten Outstanding Young Americans” under the age of 40 by JCI USA (Jaycees). As Mayor, Holt has also received the Visionary Award from the OKC Black Chamber, the Outstanding Civic Leader Award from the Asia Society of Oklahoma, the Shadow & Act Award from the Ralph Ellison Foundation, the Aspire Award from OKC Young Professionals, the Inspiring Hope Award from Upward Transitions, and the Key Contributor Award from the Oklahoma Academy.

For more information about Mayor Holt’s previous honors prior to his election as Mayor, click here.

For more information about Mayor Holt’s previous public service and community service prior to his election as Mayor, click here.

Having spent her career serving others and improving her community, Teresa Rose Crook brings years of experience and expertise to her role as Executive Director of CFO. Teresa earned both her Bachelor’s and Juris Doctor from Oklahoma City University before she traveled the state representing school districts in over 150 communities. She has held various executive positions including her time at Chesapeake Energy Corporation and Oklahoma City Community Foundation. Teresa’s expertise in community relations, government affairs, philanthropy and legal matters, combined with her heart for giving, enable her to provide individuals, families and organizations with guidance and options as they choose the best way to approach giving.